Halo is one of the longest-running first-person shooter franchises. However, each story is always a refreshing experience. Like every other franchise, the stories are often intersecting with lots of twists, turns, and spin-offs. Therefore, hardcore gamers with a flair for good stories will always like to play titles in order of release so that they don’t miss any detail.

The compelling story of the Halo game is what keeps fans longing for more—and Xbox Game Studio is always happy to satisfy that yearning. For those who want to play Halo games in order, it is going to be a long bumpy ride considering that this is one of the longest-running franchises with the first release dating back to 2001.

For the past 20 years, Halo has been dishing out fascinating gameplay. The first thing that you will notice when playing Halo games in order of release is the evolution of graphics and sounds. The controls and weapons have also evolved significantly from the early days. Perhaps, you will appreciate the history of this nerve-cracking game if we backpedal a little.

For Halo, the main story revolves around Master Chief John-117, one of the supersoldiers that go by the codename Spartans, and Cortana, his artificial intelligence companion. The focus of the original trilogy is on an interstellar war between an alien alliance (Covenant) and humans. The Covenant worship the Forerunners (an ancient civilization) under the direction of their leaders, the Prophets.

Original of this critically acclaimed series earned the moniker “Xbox’s Killer App”. Subsequently, “Halo Killer” was used for any game that is better than Halo. In order words, Halo became the gold standard for first-person shooters or FPS. Halo is now the all-time highest-grossing franchise with over $3.4 billion in sales. Today, the Halo Universe comprises best-selling novels, short movies, feature films, comic books, and other products.

Which Halo is the hardest on Legendary?

The odds are you will be dead in the first five seconds of “Gravemind” level on Halo 2. If you survive the attacks of the two Brutes in those delicate seconds, you have to fend off a horde of tough Covenant forces. Even worse, the arena where you’ll fight them has a little cover. Your best bet would be to get lucky with the artificial intelligence of your enemies. It is not surprising that it has been ranked the all-time hardest FPS level.

Which Halo game made the most money?

To date, Halo 5: Guardians is the biggest in the Halo series. The game grossed over $400 million globally in game and hardware sales. The game was estimated to have sold over 6 million copies in the first week. Also, the game was released in three versions, the standard $60 version, the Steelbook version ($100), the “Limited Collector’s Edition” ($250), and the Xbox One console bundle ($500).

What is the correct order of the Halo games?

It’s over two-decade since the release of the first Halo game. Some of us actually grew up with the game. For those that are just starting out the franchise, the best way to enjoy the game is by playing it in order of release. So, below is the right order to play the Halo game.

Halo: Combat Evolved launched the franchise into the limelight on November 15, 2001. The game quickly became the gold standard for FPS game developers. One of the revolutionary features of this game was the split-screen functionality. Also, it allowed rivals to play simultaneously and quickly became the new trend. Friends found a place to compete. Following the success of the game on Xbox, it was later launched on Windows and Mac OSX. Don’t worry, we are not dropping any spoilers on this one.

The sequel to the first Halo game delivered beyond the anticipation of gamers. The game had a number of breathtaking features including vehicles, new weapons, multiplayer maps, and a new game engine. In an interesting twist, the game allows the player to swap roles between a Covenant Elite (the Arbiter) and Master Chief. The game was Xbox Live’s most popular title. However, that reign ended with the release of Gears of War. The remastered, high-definition version of the game was released in 2014 and is part of the Halo: The Master Chief Collection.

To keep up with the amazing story and revolutionary gameplay of Halo 3, many fans were left with no option but to upgrade their console to Xbox 360 which was released two years prior. The biggest upgrade to this game was the emphasis on multiplayer. Therefore, the game had an updated map pack and a ranking system for gamers. Like the predecessors, you will be fighting to stop the activation of another ring. Single-player mode players also got a trilogy arc. Halo 3 set an intimidating record with $170 million in sales on the first day of its release. A week later, that figure jumped to $300 million.

Call this an experimental release and you won’t be totally wrong. Firstly, this Halo significantly veers off from the story of the first three series. Inasmuch as Master Chief is still the lead character, players can now control an entire army rather than just Master Chief. The story goes back to the very beginning. It is set two decades before Halo: Combat Evolved. It features some of the early encounters between humans and the Covenant. Following the success of the game on Xbox 360, it was released on Xbox One and on Windows as Halo Wars: Definitive Edition.

For Halo lovers, 2009 is one of the years they will not forget in a hurry. Halo 3: ODST came in the same year as Halo War albeit much later. This release expands on the storyline of Halo 3. Like Halo Wars, the story shifts from Master Chief to five ODSTs (Orbital Drop Shock Troopers). The game was first released on Xbox 360. One of the greatest roadblocks for gamers was the high cost. The game was systematically released on two discs. The first had support for single-player mode while the second was a multiplayer mode variant of Halo 3. This short addition to the Halo series also saw the introduction of the firefight mode. Firefight mode allows up to 4 players to fight off waves of Covenant invasion.

This was the last Halo game developed by Bungie. It served as a prequel to the original Halo trilogy. Bungie parted ways with Microsoft after the release. Yet again, Master Chief was not the focus of this episode. Nevertheless, fans enjoyed the strong multiplayer and campaign inclusion which also made this a huge success. Players took up the role of Noble Six in this installment. Noble Six and his elite squad had the role of defending planet Reach from Covenant attack. For fans, it was a sentimental departure for Bungie and the fear of what comes next. Reach later became the face of Halo during the Halo 1 anniversary re-release.

It was a huge transition to 343 Industries as the new developer and the expectations were really high. Finally, Master Chief made a return in this installment. It was the first in what will become a new trilogy. This installment also emphasizes one of the reasons why you should play Halo games in order of release because the story continues from the events of Halo 3. Promethean Knights, a new enemy made the first appearance in this release. Playing through the eyes of Chief and Cortana, the player explores Requiem. Cortana experiences deteriorating mental health and think herself into AI death. Although the game was first released for Xbox 360, it was later available for Windows and Xbox One as the Master Chief Collection.

For the first time, Halo breaks away from FPS to a twin-sick shooter. Thus, the player experiences the game from a bird’s eye view. Notwithstanding the new viewing angle, the game was able to retain the vehicles and weapons from the main series. This time, the game follows the story of Sarah Palmer. The player’s planet Draetheus V is under attack from rogue Covenant. Your duty is to repel the invaders and buy time for the surviving human forces to escape.

Following the unlikely success of Halo: Spartan Assault, 343 Industries once again teamed with Vanguard Games to deliver yet another masterpiece as far as twin-stick shooter goes. Like the predecessor, Master Chief was also missing. Fans anticipated a console version but it never came. The story is set in the aftermath of Halo 4. Here a Spartan IV soldier leads UNSC forces against the Covenant attack simulation. You will encounter Promethean enemies and the breakout faction of Covenant. Arguably, this was the least impactful Halo release to date. 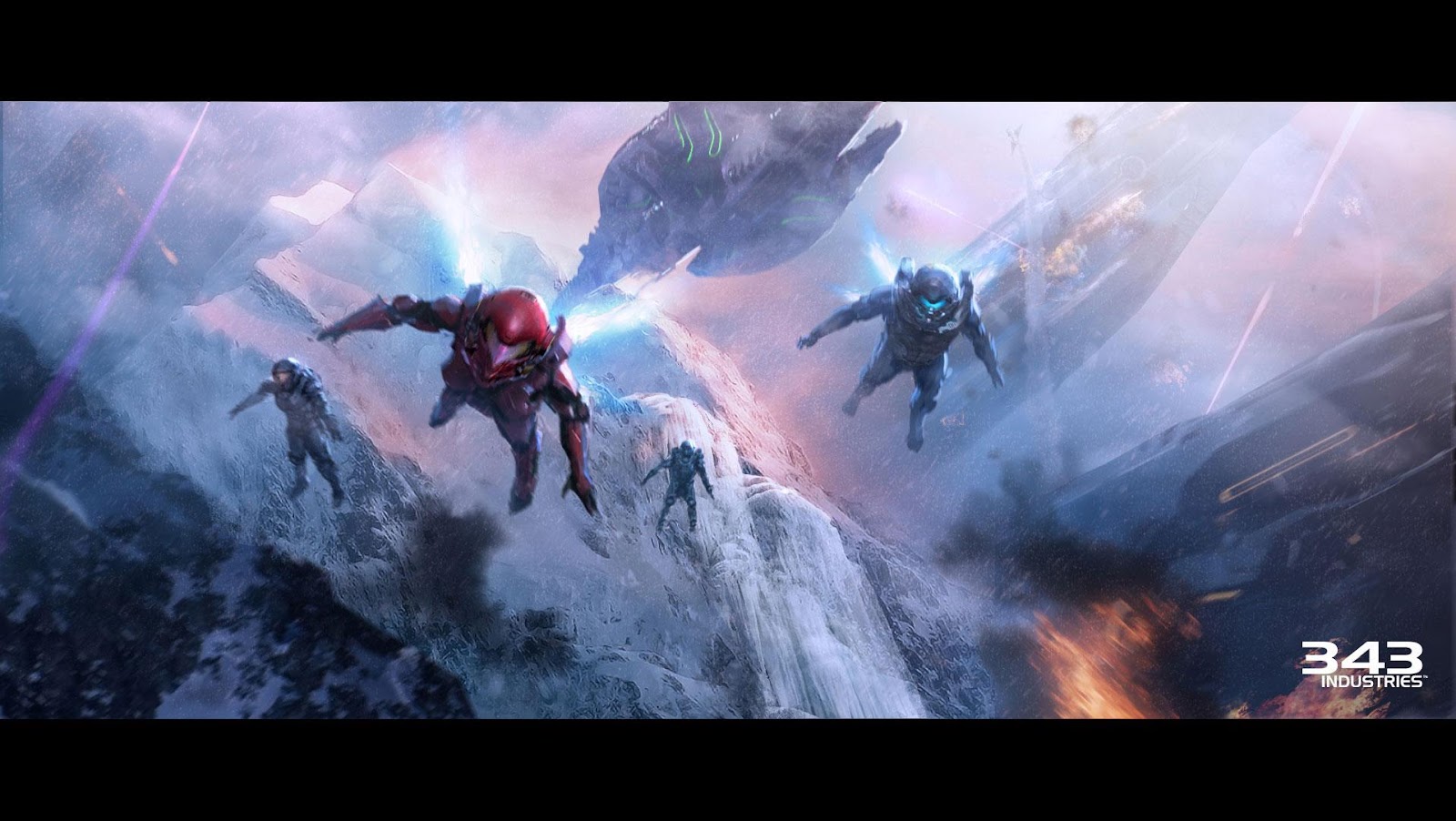 Although this would be the tenth overall in the Halo series, it was the fifth mainline entry. Also, 343 Industries decided to go it alone after a two-release partnership with Vanguard Games. With this release, 343 Industries was able to pacify some Bungie fans to return to the franchise. Sadly, the developers got rid of the split-screen which fans have come to love. However, they made up for it with over 20 maps and a new multiplayer mode. Also, players got a refreshing experience playing the Arena and Warzone modes. In this episode, Dr. Halsey was stuck on a planet controlled by the Covenant, and a Fireteam Osiris was deployed on a rescue mission. Master Chief returns in the campaign with his blue team and stages a bold attempt to defend a research station for ONI.

This is a real-time strategy (RTS) installment and the reception was warm. Set 28 years after events of the first Halo game, Master Chief was once more nowhere to be found. Instead, the story follows the Spirit of Fire crew fighting Banished, another alien faction. Like the other Halo games, there was no shortage of battles. On January 29, 2019, 343 Industries announced huge updates to Halo Wars 2. This includes adjustment of some game files and bug fixes.

What is the strongest weapon in Halo?

Inasmuch as there is an array of weapons in the Halo series, Halo1 Pistol is by far the best Halo weapon. The main strength of the pistol lies in the versatility and ridiculous power. It can take an enemy down with three headshots. In addition to that, it has an expanded ammo capacity which makes it more resourceful than a sniper rifle.

Will Halo Infinite be the last Halo game?

Halo Infinite was scheduled to release in 2020. However, unforeseen delays forced that date to be pushed forward to the Fall of 2021. In a lengthy update on December 8, 2020, the Halo team gave insights on how the game has advanced from the July demo. Highlighting some of the improvements made to Halo Infinite, Ani Shastry, the Development Manager of Halo Infinite said,

“Some of the key areas of progress include better quality of global illumination, ambient occlusion, shadows, volumetric lighting, sky, and atmosphere. We have also addressed issues with our GPU-driven rendering and texture streaming solution that should mitigate the LOD popping and texture quality issues that were prevalent in the July demo.”

Neil Harrison who is the Director of Art Management at 343 Industries since Halo 4 gives further insights into Halo Infinite.

“In addition to the graphics tech changes, we have made a lot of improvements on the Art/Content side across all disciplines such as Environment, Lighting, Weapons, FX, and more.”

Sadly, Halo Infinite will be the end of a decade running standalone Halo titles. According to 343 Industries, the developers have no plan of making standalone Halo titles in the future. Nevertheless, Halo Infinite will be a starting platform for the launch of future Halo experiences. One thing that should excite fans is that the game will launch on Xbox Series S and Xbox Series X. Thus the game is set to bridge the generational console gap. It will also have free-to-play components which will hopefully attract more players.